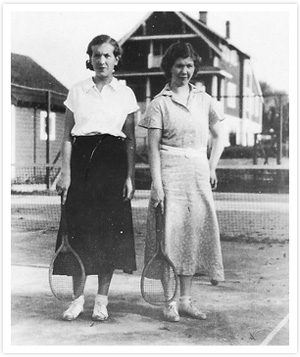 Their story began when their father, Hugh, journeyed from Scotland to Canada (and ultimately Burnaby) to build their family home. When the home was built, his wife Mary followed (children in tow) first by steamer ship and then by train to join Hugh.

Travelling in 1912 had none of today’s conveniences. On her own, and looking after six young children at a time when packaged baby foods and disposable diapers didn’t exist, Mary’s experience would boggle the minds of most young moms today.

Mary had no idea what she’d find in Burnaby, but she took it all in stride. Her life blossomed in their new home on Regent Street and, soon, two more children joined the McCallum household.

In total, Mary and Hugh McCallum had eight children: John, William, Hughie, Archie, Malcolm, Margaret, Flora, and Alex. As Margaret and Flora were the only girls in the family, they worked hard helping their mother with household chores.

The children grew up in an area called Broadview, where Douglas Road and Lougheed Highway are to the north, Willingdon Avenue to the east, Highway 1 to the south and Boundary Road to the west. In the 1920s the neighbourhood was home to about 100 families.

Margaret and Flora enjoyed endless adventures in the surrounding farmland, and cooled down on hot summer days by playing in nearby Still Creek.

As the McCallum children grew, some married and moved away, but Margaret, Flora and brother Hughie never did. They lived together in the same house, even after the passing of their parents.

Both Margaret and Flora worked full-time and volunteered in the community. They were active with the Eastern Star, a Masonic service organization. Margaret was accomplished in embroidery and Flora loved to garden and create beautiful flower arrangements. Their crafts were highly prized and often used to raise funds for various charities.

Margaret and Flora volunteered in Burnaby Hospital’s Cancer Centre and also at the hospital thrift shop when it was located on Canada Way.The sisters gave more than their time and talent, however. They were both longtime donors to Burnaby Hospital Foundation, providing generous annual gifts to support equipment purchase at the hospital.

The McCallum sisters and their two brothers loved the family home. In the late 1990s, however, the four McCallums, now in their eighties, experienced a terrifying home invasion. Thugs kicked in the front door. As the criminals rushed in, Flora and Margaret screamed to their brothers. Luckily the ruckus scared the thugs off. While no one was injured and nothing taken, the home invasion caused serious emotional distress. Neither sister could sleep at night. They no longer felt safe in their own home.

Sadly, they decided to sell the house. Alex moved into his own apartment, while Hughie, Margaret and Flora stayed together and bought a place on Olive Street. Although they lived on Olive Street for several more years, their health began to deteriorate and they moved into assisted living for seniors. The brothers eventually lived at two different facilities, but Margaret and Flora stayed together.

Hughie and Alex passed away first, and while both Margaret and Flora were physically strong, Flora suffered from dementia and failing eyesight that eventually led to blindness.

Their final years were spent at Dania Home in Burnaby. Margaret, whose only frailty was deafness, received intermediate care from the staff at Dania Home. However, Flora, now fully immersed in her dementia, required full-time extended care. Flora no longer recognized her sister or any of her family members.

Niece Heather recalls, with great fondness, the many visits she made to Dania Home. “When I couldn’t find Margaret in her room, I’d know just where to look. I’d find her, sitting in silence next to Flora, simply holding her hand.”

Last year, as Heather and her family prepared to move to Bowen Island, the phone rang with devastating news. Two weeks after celebrating her 100th birthday, Margaret, the eldest daughter of Hugh and Mary McCallum, had pass.

Maybe Flora’s dementia was a blessing in this situation because it cushioned the emotional blow of losing a beloved sister. But Heather suspects their connection ran much deeper than that.

“As Executor for Margaret’s will, I was planning to complete the paperwork once my family and I settled in our new home on Bowen Island. Instead, I ended up filling out estate paper work for both my dear aunts because, just five weeks later, at the age of 97, Aunt Flora also passed away. They did so many things together in life that, to me, it was appropriate and fitting that this final chapter of their life would close together.”

Once Heather and her family began landscaping their new property, Heather noticed purple thistles everywhere. “I have many beautiful table linens that were embroidered by my Aunt Margaret. Many of them are decorated with thistles, the national symbol of Scotland. Seeing the thistles all around my new home really makes me know they’re here with me.”

One of Margaret and Flora’s final wishes was to impart a final gift to their beloved Burnaby Hospital. Each sister left a significant bequest in order to help the hospital for years to come.

“They were very private people,” says Heather. “But I think sharing their story is a fitting testament to my aunts and the entire community.”