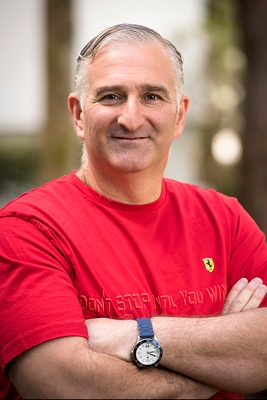 The Heart Tells a Story

If there was ever a perfect moment to trust your intuition, Enzo chose that moment. And it saved his life.

Friday night, September 18, 2015, was almost Enzo Ricardi’s his last night on this earth; he suffered a massive heart attack. At only 47 years old, Enzo might have been excused for dismissing the strange electrical current that seemed to shoot from his fingers to his shoulder. Yet, he’d felt that odd sensation earlier in the day too, and his instinct pushed him toward the emergency department at Burnaby hospital.

He was taken to the emergency area where a nurse took his blood pressure. Then she took it again and immediately called a Code Blue. Enzo’s blood pressure was sky high. He was fully conscious as he was taken for tests to determine the cause of the startlingly high reading. But everything came back normal. In spite of this, emergency doctors decided to keep him in the hospital for observation.

Suddenly, at 3:30 a.m. Enzo felt a sudden, excruciating pain in his chest. “I lost feeling in my hands and feet, and they turned white. I reached for the emergency button beside my bed and before I knew it I was being rushed to a cardiac specialty centre for an emergency heart procedure.”
Enzo was in pain but he was fully conscious. “Nick, the ER nurse from Burnaby Hospital, stayed with me, right by my side,” recalls Enzo, “Nick was with me the entire time, even in the ambulance. Trying to keep me calm, trying to keep me awake.”

On arrival at the heart centre, doctors immediately started the stent procedure to open Enzo’s aorta, which was 100% blocked. It was as if a garden hose, full of coursing water, was suddenly clamped off. He could feel nothing below his chest. In fact, his gorged heart stopped: four times. Four times, Enzo “died” on the table that night. He was defibrillated each time. “And,” he says, “I was alive. The minute the stent opened my aorta, I felt blood rush through my body.”

After the procedure, Enzo was brought back to Burnaby Hospital for monitoring and further care. “I’m so thankful for Burnaby Hospital—my community hospital—for recognizing right away something was seriously wrong and knowing exactly what to do. I am also thankful for the medical teams that saved my life. And for people like Nick who stayed with me and kept me fighting.”

Today, Enzo is a part of the Healthy Heart Program at Burnaby Hospital. He feels great and his recovery is going well. He says he’s taking it one day at a time, but hopes soon to return to teaching and his active lifestyle.