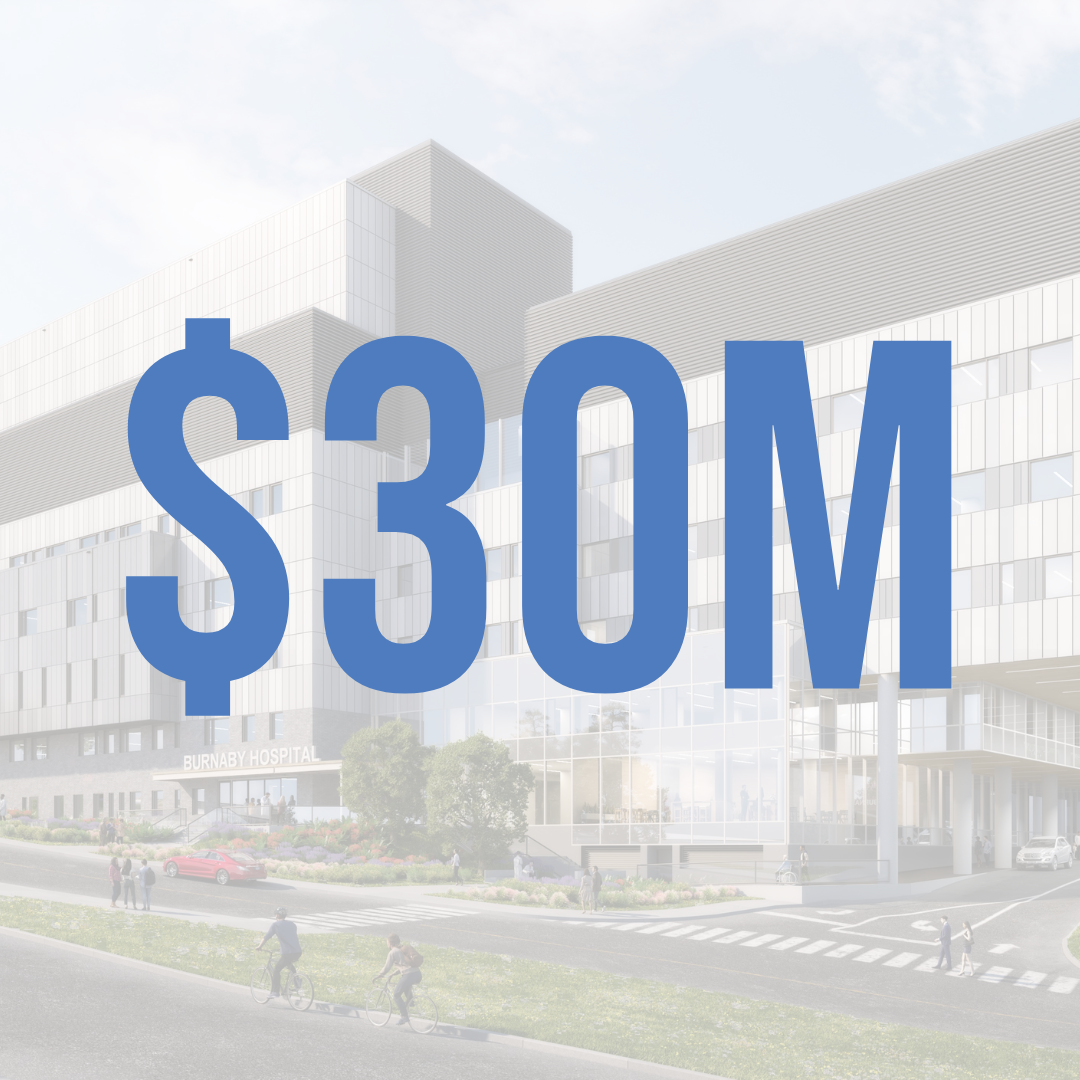 “This is truly a moment that we should all be proud to celebrate,” shares Kristy James, Burnaby Hospital Foundation President & CEO. “Reaching this fundraising milestone is a noteworthy accomplishment for our community and it demonstrates their impressive support of their local hospital.”

Alongside surpassing the $30 million milestone, the Foundation also announces that they have met the full $5 million matching gift from Jim Pattison in just six months. The Foundation continues to receive donations from supporters who maintain their strong support for the redevelopment project.

The Foundation launched their Proud History, Bright Future campaign in February 2020 with an $8 million leadership donation from Mrs. Betty Beedie. To-date, generous $5 million contributions from the City of Burnaby and Jim Pattison highlighted the redevelopment campaign. Significant gifts by Alexander College, KTL Transport Inc., William McCarthy, Peterson, and Ken Shinozaki have helped grow the total and inspire many others to give.

“Since the start of the campaign, Burnaby Hospital Foundation has received over 10,000 donations towards the redevelopment,” shares William McCarthy, chair of the Foundation’s Fundraising Cabinet. “It is my privilege as chair to see the community come together in such a strong way to support much-needed upgrades in health care. The transformation of our hospital will have a lasting impact on the health of our community now and in the future, and I’m proud to play a part in this important project.”

With no major renovations in the last 50 years, Burnaby Hospital has reached its capacity. The hospital is one of the busiest in the Fraser Health Authority region, seeing approximately 200,000 patients a year, including 83,000 visits to the emergency department. Facilities that were constructed to serve a small community now support a growing and aging population of 500,000 people in Burnaby, East Vancouver, and the surrounding areas.

Construction of the first phase, which will upgrade and modernize emergency care, surgery services, maternity and mental health at the hospital is set to be completed as soon as 2025 and when the entire project is finished, the transformation will have an immediate and future impact on patients, staff, and the surrounding community as a whole.

“On behalf of the Foundation, medical staff at Burnaby Hospital and all the patients we support, I want to share my deep gratitude for each person who has donated towards our redevelopment campaign,” says McCarthy. “While this achievement is no small feat, there is still more work to be done. This significant milestone is only the first step in a much larger campaign.”

“The amount that we have raised together so far shows that our community recognizes the urgent need for an upgraded and modern Burnaby Hospital, and they are willing to put their donations towards that goal,” says James. “It has been inspiring to see our community rally together to show their strength and resilience, especially in these last three years.”

The gathered guests joined in the celebration of this milestone, which included a record-breaking $480,000 raised at the No Place Like Home Gala. The successful return of Burnaby Hospital Foundation’s in-person gala was met with vigor and excitement for a night full of celebration.

The sold out gala, presented by the Burnaby Firefighters Charitable Society, was emceed by TV personality, actor, and award-winning host, Todd Talbot. The evening featured performances by Wings Collective, and also served as an opportunity to recognize the foundation’s 2022 Philanthropy Award recipients.

“Our award recipients have all demonstrated outstanding commitment to health care excellence through philanthropy and community leadership,” shares Steven McKoen, KC, chair of the Foundation’s Board of Trustees. “These individuals and corporations have tirelessly supported and advocated for the Foundation and are an inspiration to us all.”