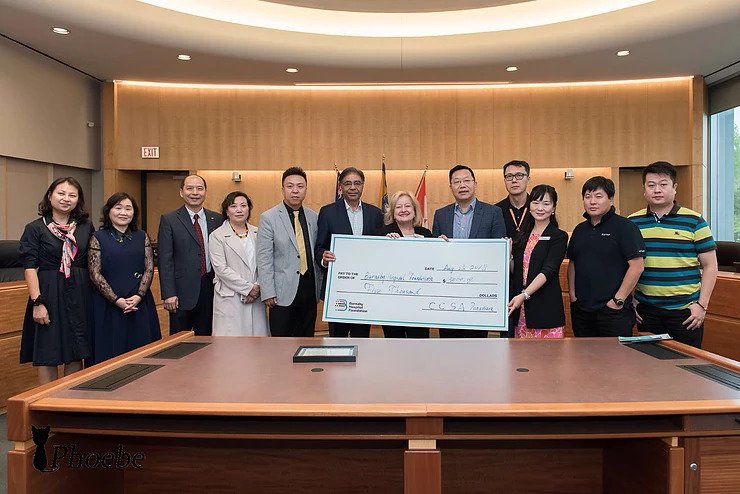 At a ceremony held at Burnaby City Council Hall on August 23, 2018, the Canadian Community Service Association (CCSA) presented a donation of $5,000 to the Burnaby Hospital Foundation, in recognition of funds raised for the Foundation at the 2018 Chinese Cultural Heritage Festival on July 29.

Hosting the event was Vice-Chair of the Foundation’s Chinese Ambassador Society, Chris Dong, a member of the Burnaby Library Management Committee, and Claire Wang, Director of Finance & Operations at the Foundation.

The Chinese Ambassador Society was established less than half a year ago, and has already raised nearly $90,000 toward supporting Burnaby Hospital. All donations have come from the Chinese community, including the generous support of the CCSA.

Speaking on behalf of the City was Councillor and Acting-Mayor, Sav Dhaliwal, and Councillor James Wang, who thanked the attendees and noted that everyone in Burnaby lives in a multi-ethnic community and needs to work together to make it better.

Director of the CCSA, Hua Niu, said that the cooperation between the association and the Hospital Foundation can be traced back to 2-3 years ago. This donation is not the first, nor will it be the last for an organization that is committed to community service work, and has donated tens of thousands of dollars to major causes.

In addition to the donation, the event also honoured donors and volunteers who participated at both the Chinese Cultural Heritage Festival, as well as the Melody of Love Youth Charity Concert organized by Burnaby General Association of Chinese Communities on June 16th. The honourees, mostly children, each received a certificate of appreciation from the Foundation.

In a letter, the Foundation, the Chinese Ambassador Society and the Rotary Club of the Dragon – Greater Vancouver, warmly congratulated the Chinese Cultural Heritage Festival on the success of its 10th year, and sincerely thanked the CCSA for giving them the honour to participate – especially having the Foundation named as the charity partner for the festival, which is the largest Chinese event in Burnaby. Foundation CEO, Kristy James noted that Burnaby Hospital’s mission is to provide health care for the local communities, and that includes the Chinese-speaking communities. She also praised the CCSA for its dedication to community service for many years, and especially for the charity of the Hospital Foundation over the years.

The Chinese Cultural Heritage Festival continues to actively promote the support of local medical and health charity, and looks forward to even greater achievements moving forward.

Other guests in attendance at the event: